Theatrical  performers, well experienced and passionate about sharing Christ with others.

A professional actress for over 20 years, Lise Lacasse enjoys putting herself in the shoes of quite a diverse group of characters in everything from feature films, sketch comedy and improv, theatre, television commercials, radio voice-overs, educational entertainment, and assembly programming for schools and families such as Magic Carpet Theatre. And now that the Christian Drama Ministries, The Parable Project and At His Feet, are fully underway, Lise is especially satisfied that her craft and her faith can collide at the foot of the cross. Being a part-time missionary to Kenya and South Africa since 2003, Lise has spent her time serving the people and has taken stories from Magic Carpet Theatre to share with children in Africa. She has also acted in films including Trust with Clive Owens and Catherine Keener; MOOZ-Lum with Danny Glover, Nia Long and Evan Ross; and Beyond the Mask, a Christ-centered action film.

In memory, we honor Marybeth Kinnell, founding member of our ministry.  "God is good - when he gives you a gift he gives you the means to give it away."-MBK 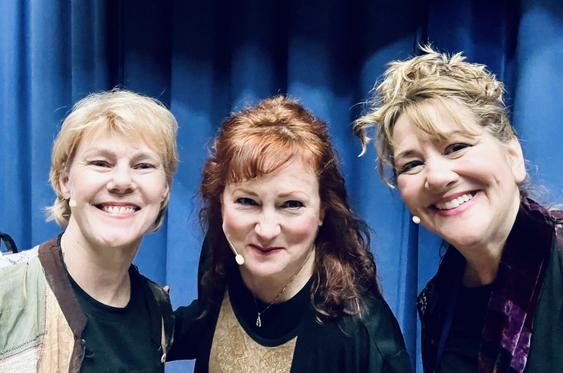 Amy Susan Heard, a professional Christian vocalist and winner of Two Detroit Music Awards (Outstanding Christian Vocalist & Songwriter 2004), is currently using her gifts as a solo singer/songwriter. Along with composing music for Drama Ministry’s original CD, “At His Feet”, she has collaborated with composer, James Stonehouse, on several projects for stage and film. With her Masters of Music, Amy teaches private voice, guitar and piano lessons.  She was thrilled to play Mary Magdalene in "Living Stations of the Cross" in 2010-2011 (Michigan). “I love the way Jesus used parables to provide a vivid picture of His Will for our lives, guiding us through each trial and instilling in us His Peace. I find so much joy in using my gifts in this fun and creative way to be a blessing and a light to others."

Catherine Zardus*, Founder and Artistic Director,has produced, directed, and performed for Magic Carpet Theatre for thirty years and in 2008, developed MCT Drama Ministry producing three original shows that promote the Gospel: The Parable Project, At His Feet, and The Parable Project:Take Two!  Catherine obtained her B.S. in Theatre from Eastern and earned her M.F.A. in Acting at Detroit's own Hilberry Repertory Theatre, where she was nominated twice for Best Supporting Actress in Detroit. She has performed in regional theatres  across the country and directed the 2012 production of The Living Stations (now The Cross and the Light) at the Cathedral of the Most Blessed Sacrament in Detroit. In 2015, she was the director for We Humble Ourselves: Turning a Nation Back to God. She has performed her original works at the Catholic Women’s Conferences in Detroit and Lansing and produced the At His Feet CD  with original scenes, music, and meditations (nominated for two Detroit Music Awards). Catherine is an active member of Divine Child Church in Dearborn, participates in intercessory prayer, and has been blessed with a vocation as a wife and mother. *Member of  Actors' Equity Association.